After enduring years of the Great Recession there's finally a segment of the runabout market that’s booming, but it isn’t your usual bowriders or center consoles. It’s pontoon boats. For whatever reason, pontoon boats are a hot ticket in today’s market, and you know it’s serious when players like Larson Boat Group and Cobalt, two boat builders that have never built pontoons, are getting into the game. Chaparral aims to tap into the excitement, but by taking a different tack with its new 250 SunCoast. 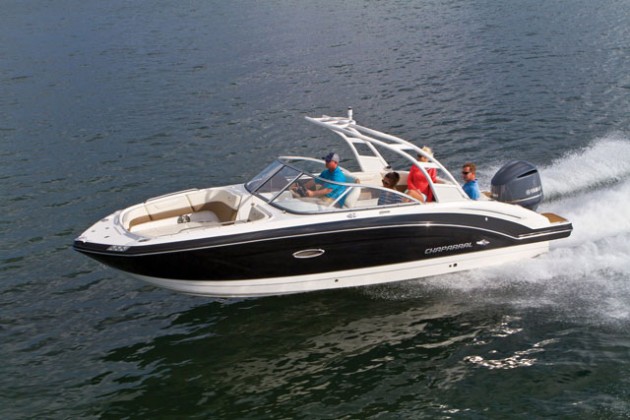 The Chaparral 250 SunCoast takes steady aim at the pontoon market, with a deckboat design.

Rather than entering a segment its plant isn’t equipped for–welding aluminum vs. laminating fiberglass—Chaparral plans to grab market share from pontoons by offering a spacious deckboat with outboard power. (For more information on the expansion of outboards in the runabout market, read Outboard Engines on Bowriders: Match Made in Heaven.)

“10 or 15 years ago, we had outboard boats, and we just got away from them. Now we’re getting back into them. We just wanted to bring our DNA into the outboard deckboat category,” said Bill Pegg, Southeast regional sales manager for Chaparral Boats. “There are other outboard deck boats out there. We feel we are a notch higher in quality. I think our customers know that, and they’ve been looking for outboards from us for a long time.”

Unlike pontoon boats, deck boats are actually rewarding to drive—fun, even—and are just as functional at rest as a pontoon boat. The use of an outboard engine will strengthen the 250 SunCoast’s position in the market for coastal boaters and inland buyers who enjoy the convenience of outboard power.

Chaparral already has a line of deck boats in its Sunesta models, but the SunCoast features a revised layout. It has some of the same features, such as a head compartment, lots of room on deck, and spacious swim platforms at the bow and stern, but the SunCoast 250 offers buyers another viable choice in deck boats.

At the bow, the four-step telescoping swim ladder tucks neatly beneath its own hatch, which also conceals an anchor locker complete with a rack to hold the flukes of a Danforth. What’s neat is that Chaparral installed a pop-up navigation light so it won’t get damaged when using the ladder or pulling out the anchor. Great attention to detail, there.

Another nice touch is the standard cockpit table, which fits into receptacles on the seat bases—fore and aft—rather than in the sole. That’s worth mentioning because people won’t stub their toes on the pedestal mount while the table is in place, nor will they trip over the receptacle when the table is stowed. 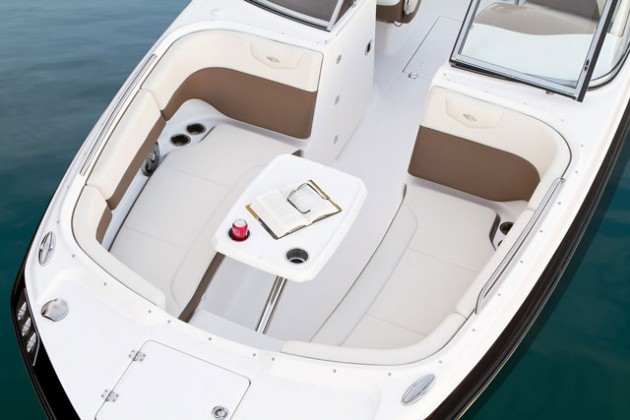 The table can sit either forward or aft - without creating a tripping-point.

In the cockpit, which is self-draining, Chaparral included a flip-up thigh bolster for the driver and room for two, if they’re comfortable enough to get close. The observer’s seat also is wide enough for two, and it converts to a rear-facing lounge. The head compartment comes standard with a portable MSD, but is also available with an electric model. It’s a bit small for adults, but probably right-sized for the kids. Another great kid-friendly feature is the color-coordinated Bimini top, which comes as standard equipment.

At the stern, Chaparral designers found a way to accommodate the outboard power plant yet still offer a substantial swim platform. It’s covered with Sea Dek foam and fitted with stowage compartments on either side and another telescoping swim ladder on the starboard side. In short, the 250 SunCoast does everything a pontoon boat does at rest, and more when it’s on plane.

“We’ve had it on the drawing board for a while,” Pegg said “We knew we wanted it. We knew the demand was there, and not just in the coastal markets, but we think we can go after the pontoon market with this model.”

Other Choices: Bayliner has taken the same approach at targeting the pontoon market with their (slightly smaller) Element XR7. Same goes for the Sea Ray 240 Sundeck, which is available in both outboard and stern-drive models.

Written by: Brett Becker
Brett Becker is a freelance writer and photographer who has covered the marine industry for 15 years. In addition to covering the ski boat and runabout markets for Boats.com, he regularly writes and shoots for BoatTrader.com. Based in Ventura, Calif., Becker holds a bachelor’s degree in journalism and a master’s in mass communication from the University of Central Florida in Orlando.
Advertisement
Boat Reviews